Words. They can be a problem.

Nobody knows that better than Louis CK. It’s kind of his schtick: Observing the absurdity of language and playing with it, in all it’s messy glory. Like a kid in mud. Hunting for that delicious worm that makes it all worth it.

It’s all mapped out in his FX original series, Louie. Here we get delightful musings on the pitfalls of every day language. Those things we take for granted. Moments like this little gem in Miami:

Here, Louie sits at a table eating from a plate of fruit. A young, blonde beauty walks by. “Can I have one of these?” She asks as she plucks a strawberry. Never in the midst of this request does she pause or even expect approval. She just does it. “No, you can’t.” Louie says, annoyed. “So you just ate a strawberry you can’t have.”

Louie’s objection is a passive one. And it’s trumped by speedy action. A familiar pattern, to be sure.

Enter Laurie (Melissa Leo). In a forced double-date, things go decidedly bad. In the beginning, anyway. Then they have a few drinks. She gets frisky. It’s all good fun, until Louie’s expected to “return the favor.” He refuses initially, until Laurie enacts some erm.. encouraging brute force.

She’s a lady that inspires movement. When words fail her, she acts. And she’s not the only one. Let’s review the other females in Louie’s life and the ways in which they champion language:

1. Later in Season 3, his ex-wife and mother of his kids encourages action when Louie has his doubts about possibly replacing Letterman’s Late Nite spot.

2. Liz (Parker Posey) sets his world on fire with an unpredictable and eventful first date in which every impulse is dutifully honored. No word or action is off limits.

3. Then when she suddenly vanishes, Jeanie (Chloe Sevigny) practically bullies our protagonist into finding her.

4. Not to mention the only thing that prompts a visit to Ikea is the promise of a certain sex act by yet another one of Louie’s exes. 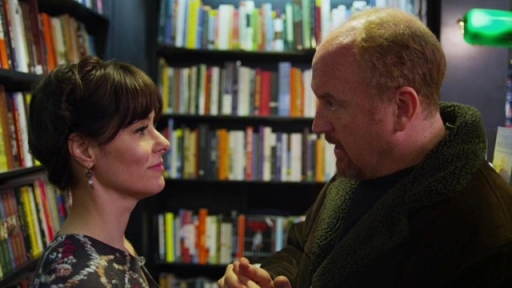 So the notion of dominant alpha male falls by the wayside. Women drive the plot. They initiate action. If it’s not directly, it’s in Louie’s pursuit of them. Whereas Louie is stagnated by doubt, they have power. A distinct absence of fear. One that permeates in their willingness to play, both verbally and physically.

Try as he might to tame language, it’s all fumbling flirtations in the presence of women. And even when he “has an in,” the intimidation factor lingers.

Episode 1 of Season 3 sets the scene for this dynamic. He and girlfriend Angela break-up in a coffee shop. But never in this moment does he agree or even suggest a separation. She runs the show. And if it weren’t for her certainty, we would never know if this was something Louie really wanted. His communication is all non-verbal. Because in these bigger moments, words don’t cut it.

At one point in the show, Maria Bamford describes her state of hesitation and self-doubt as being “All dicked up in the head.” That moment when the symbols threaten to become REAL, all bets are off. Because, for all of language’s shortcomings, how could it ever really represent a feeling? Especially ones as elusive as “love” or “hate” or even “desire.”

The choice of words in Maria’s expression is telling, too. Because, after all, which half of the population has dicks? I’m just asking.

The most liberating scene in the entire series happens at the end of Season 3. Following a sudden death, Louie makes an impromptu New Years’ visit to Beijing. A faraway land where he’s 100% in the dark about the native language.

So he communicates in a more basic way. Sort of like a gorilla. Through facial expressions. Hand gestures. Exaggerated inflections. He’s offered a seat and food. And he and the locals share words. Indistinct syllables and sounds that they paddle back and forth like a game of ping pong. It’s all play. Interaction for no particular reason other than to not feel weird with each other.

We notice that without the burden of meaningful words, there’s no threat of subtext. Only clumsy surface exchanges. And that lack of clarity is actually celebrated. Because who can’t relate to the social anxiety of being misunderstood?

Louie’s brand of comedy reminds us that the fear and doubt and questions we experience daily are the things that actually keep us connected. That those are the things that make being alive so exciting. And let’s face it, in an age where texts and tweets override face-to-face contact, we could all use the reminder.

Everything is Amazing and Nobody Is Happy! Typically Poignant Indictment of the Self-Entitled

3 thoughts on “Why I Love Louie”